Lanterns: Nevermind Trump. We Need To Look At 'Sh-holes' for Bigger Reasons

Nevermind Trump. We Need To Look At 'Sh-holes' for Bigger Reasons

You may have heard that President Trump called certain third-world countries “shi** holes.”  Perhaps we need to take a closer look at those countries, and our own, from a different angle.

President Trump’s remarks (if he really said them, since there’s debate over that) have been discussed aplenty in the media lately.  I’m sure calling third world countries insulting names in front of the open mic of mixed company (Democratic legislators, who definitely aren’t trying to nail him with literally anything they can find) is doing a great deal to advance American prestige, power, and security, but never mind that for a minute.  Perhaps, even we who are fortunate enough to be blessed with a very smart, stable genius, are missing something in this media frenzy.

I read a completely different take on the matter by Peter Heck at The Resurgent, about how Jesus liked “crapholes.”  That the miserable and destitute were where God’s compassion and love were most directed because it is those hearts that have been humbled, simplified, and made open to the Word of God’s Truth.

What about us, though?  I've often wondered if, at the other end of the extreme, we, in the lap of luxury, (which America truly is, despite what shallow souls like Stephen Colbert think), are at times forget our roots, our essentials.

The people in these third world hellholes frequently have no clean water, little or nothing to eat, hand-me-down rags for clothes, and newspapers for shoes (if that).  Yet, they somehow manage to avoid fussing about microaggressions, 9001 genders, aborting their babies, or apologizing for the distant past that they had no hand in.

This isn’t to say they don’t have plenty of ridiculous delusions and issues of their own.  After all, they’re flawed humans too, and I don’t think there’s automatically or necessarily any nobility in poverty.  I am not saying we should all be like Zimbabwe, nor am I attempting to promote some leftist “noble savage” nonsense that fetishizes the exotic, and dehumanizes foreigners into something more like dolls on a shelf than people, merely props on display for virtue signaling.  This is not a call to primitivism.

What I am saying, is that their worries, fears, aspirations, and perspectives seem remarkably grounded, in contrast to the silliness we seem to find time to fret so much about. We discuss whether boys have penises and Y-chromosomes, and things like bathroom inclusiveness, because we have the luxury, the freedom from real fear or want, to do so.  There’s a reason such debates do not occur in poor nations – they can’t afford to waste the time on it.

As miserable as we tend to think their lives are, they don't kill themselves nearly as often as we do (every year we’re setting tragic new records). They don't demonize or shun hard work, no matter how dangerous it is or how little it pays.  This is not to glorify minimal wages for dangerous work, only to point out their stoicism in doing it anyway.  We are largely spared such backbreaking misery, yet it is we, not they, who seem to need an ever more expansive cocktail of antidepressants and other drugs just to function in our lives of relative ease.

We, in the lap of luxury, may feel tempted to denigrate these nations as “sh** holes,” looking down our nose at those desperate, uneducated, poor people.  Those guilty of doing so are completely forgetting that they are indeed people, beloved by God and created in His image, endowed by Him with human dignity and certain inalienable rights. 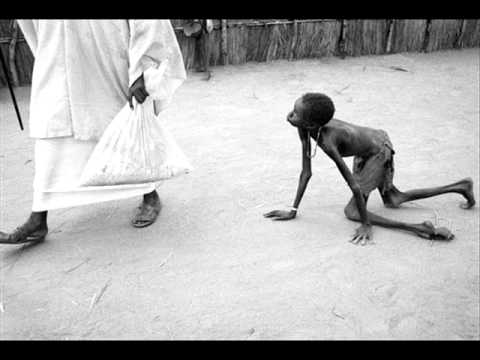 We need to look at these desperate places with compassion, not disdain.  That doesn’t mean we need to allow unlimited immigration or throw away money at projects that are hurting more than helping, but it would most certainly behoove us to refrain from a snobbish, elitist attitude.  It does neither them, nor us any good, and distracts from examining these issues that are eating away at our society from within.

Furthermore, before we become too proud, sneer at them too much, we should consider what separates us from them: potentially very little.  For most of us, it is merely a matter of birth.  Even then, being born into our privileged life (as even our poor live, compared to the third world) doesn’t guarantee we’ll stay in it.  God does indeed love to cast down the mighty, and uplift the downtrodden.

Suppose a war broke out with North Korea, and China got involved (as it most likely will), and nuclear weapons got involved (as they most certainly will).  It would take less than an hour for most of America to be reduced to a state that would make Afghanistan look good (along with China, for that matter).  This disturbingly plausible scenario is just one of many ways in which we could suddenly find ourselves living in our own sh**hole.

As God warns us, nobody has room to boast, not even in America.  So let us take a hard look indeed at these sh**holes, not with pride or contempt, but as a warning and a reminder for ourselves:

There, but for the grace of God, go I.

Christian and veteran, committed to a message of God, unity, tradition, and American principles.

Steve Bannon: a Warning for America - and Trump

Some people felt I was simply lecturing about pride without offering any solutions. I decided to answer the multitude of questions in one fell swoop, so here is my response on what I would do, and why: https://www.facebook.com/notes/joshua-nybo/what-should-we-do-and-why-should-we-do-it/532937113734494/

Addendum: Facebook banned this article without reason or cause, and has blacklisted the url