In the early morning hours around 2 AM and again at 7 PM on August 1st, three “Molotov Cocktail” incendiary devices struck the 4th Avenue Maricopa County Sheriff’s Office Detention Center setting an entryway and the sidewalk aflame. The central facility which serves several municipalities, as well as county law enforcement, houses some 1700 detainees.

The scene shown via surveillance videos from the complex seems out of place in the nation’s fifth largest city, more akin indeed less stable countries abroad where civil unrest is the norm. 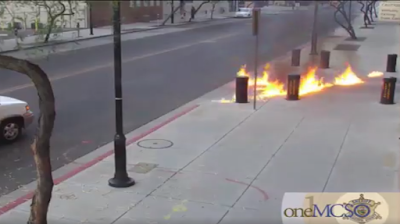 Sheriff Paul Penzone greeted the press in front of the 4th Avenue Jail in a conference carried on Facebook Live by Fox 10. The Sheriff who notably defeated embattled former Sheriff, Joe Arpaio, in 2016 and created controversy by announcing the closure of Maricopa County's "Tent City" facility in April, briefed the public. 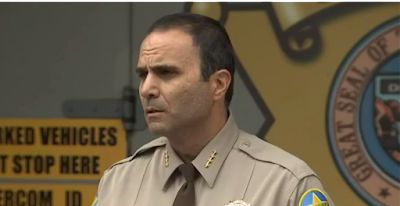 Penzone did not speculate on the motives of the suspect, identified as 27-year-old Michael Anthony Arreola of Mesa, AZ. Arreola was detained at the facility in past arrests ranging from assault to burglaries, and damaging property in Arizona and also in California. Despite assistance from the Arizona Counter Terrorism Information Center, Penzone described the attack as an act of terrorism but only in the local sense not linked to terrorism on a "more global scale." Arreola was arrested this morning without incident.

"I think it's an act of terrorism in a manner that it is an attack on individuals who work in this building and that the method that he used was extremely dangerous and aggressive. But I'm not going to frame that in the framework of something that we see on a more global scale.

While an unidentified passerby was observed fleeing, there were no serious injuries related to the attack reported. Penzone concluded:

"We're absolutely on high alert, although we know that there was, at least at this point, we've concluded one stage of the investigation, we live in a time where unfortunately there is still a challenge with the relationship with some pockets and some areas. With those who have disdain for law enforcement, we are always at risk."