Lanterns: PolitiDiva's Week-In-Review (and It's Only Wednesday)

PolitiDiva's Week-In-Review (and It's Only Wednesday)

I don't know how you feel after the firestorm of political news coming out of Washington this week, but I'm tired and in need of a margarita. This has been one of the craziest weeks in politics since President Trump took office almost two months ago. Let's get to the recap, shall we as I have margaritas to blend?

COMEY AIN'T MY HOMIE: FBI Director James Jimmy Comey was grilled by the House Intel Committee on Monday. First of all, I had never noticed that Comey was such a tall man! Who knew he was such a gigantic fellow? Now, on to the important revelations that were divulged during Comey's testimony even though I still haven’t come to grips with his Paul Bunyon stature.  To put it generally, Comey responded, "I am unable to answer that," to 99.7% of the questions asked.  We did find out, however, that there is evidence to suggest Russia attempted to interfere with the United States election just like tax payer money was used back in 2015 by the Obama Administration to tamper in Israel's election.  We also learned that Russian influence did not effect the vote totals and that Hillary lost because she was the worst candidate in modern political history on her own merits. Comey also testified that Paul Manafort a person associated with the Trump campaign was under investigation for possible nefarious Russian connections. Lastly, according to lying Director Comey, there is no evidence that the Obama administration conducted surveillance on Trump or on Trump Tower more on that later.

SMOOTH SAILING FOR JUDGE GORSUCH:  In other news this week, Supreme Court nominee and silver fox, according to my grandmother Neil Gorsuch has endured countless hours of Senators making pointless speeches interspersed with the occasional question. Here is a summary of the hearings, in case you missed them #You're Welcome:

I get that showmanship and pageantry is part of the deal with these Senate hearings, but come on, Senators especially you, Al Franken! I yelled at my television more than my father does at the New York Jets on Football Sunday. A little less talky, a little more confirmation. Despite the talk-a-thon ocurring on Capitol Hill, it looks like Judge Gorsuch will likely sail on up to the Supreme Court. 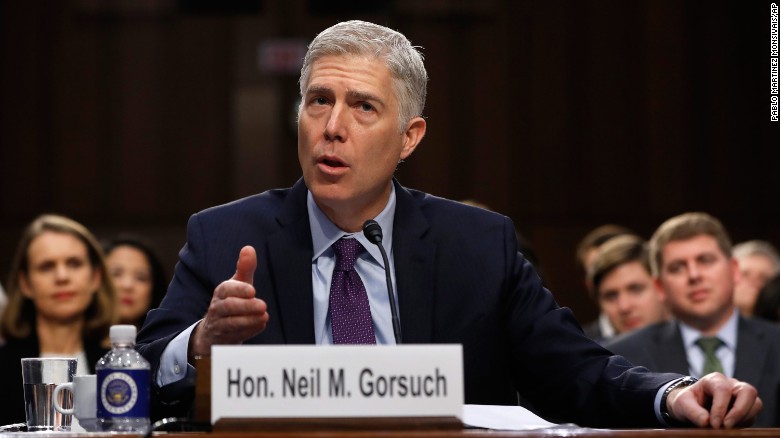 TAPDANCE AT THE TOWER:  News of the horrific terror attack that occurred in London this afternoon overshadowed what is surely to become the story of the week: House Intel Chief Devin Nunez confirmed that the Obama administration may have illegally surveilled the Trump transition team at Trump Tower. This may have been information that James Jimmy Comey did not have on Monday. Nunez, chairman of the committee said, “On numerous occasions the intelligence community incidentally collected information about U.S. citizens involved in the Trump transition. Details about U.S. persons, details associated with the incoming administration — details with little or no apparent foreign intelligence value — were widely disseminated in intelligence community reporting.” In short, President Trump is winning vindicated and I smell a big inquiry coming on. Let’s just hope that it’s not a bunch of politicians grandstanding and we that actually get some answers.

RINOCARE VOTE:  President Trump is proving to be the Deal-Maker-In-Chief, meeting with members of the House Freedom Caucus to get them onboard with Trump’s first big piece of legislation, the American Health Care Act (AHCA) which has about the same level of popularity as genital herpes. Late Wednesday, the White House made a major change to the bill in a bid to sway buy off roughly three dozen House conservatives. The big vote is scheduled for tomorrow. I just want to know why Speaker Paul Ryan is more committed to this bill than any man has been to me in my entire life.

Come back tomorrow for continuing coverage of the SCOTUS confirmation, wiretap bombshell, and on the Obamacare replacement vote.

Selective Feminists: Where Art Thou?