Lanterns: So, What Exactly is a Bump Stock?

So, What Exactly is a Bump Stock?

At 10:08 pm on Sunday, Oct. 1st, a man named Stephen Paddock opened fire on a crowd of some 22,000 people attending a country music festival in Las Vegas, Nevada. The estimated time frame of the shooting event that left 58 dead, and around 500 wounded, was about 20 minutes. The first shots were heard between 10:05 to 10:08 pm, with the last shots heard around 10:28 pm, according to officers on the scene. During that time, Paddock fired hundreds of rounds of ammunition using an aftermarket device called a "bump stock," also known as a "slide stock."

Since this tragedy happened, I have had many people ask me what a bump stock is, how does it work? To be honest, I had heard of them before, but have never used one, so I had to do a little research. Here is what I came up with, so I hope it helps.

Now, I will spend some time explaining how this device works, but I am a firm believer in visual aids. This is a good video from a manufacturer, that shows how they work. During the slow-motion sequence, you can see that the rifle moves within the buttstock. Instead of pulling the trigger, the trigger comes to you, using simple physics. Since pressure is already applied to the finger on the slide, by pushing forward on the foregrip, it automatically pulls the trigger as the rifle slides in the bump stock. Equal and opposite reactions do the rest.

Contrary to many reports I have heard in the media, this device DOES NOT turn the weapon into a fully automatic firearm. It only mimics the fire rate. For those who may be asking, "what the hell is a buttstock, and what’s a foregrip?" The image below shows a basic semi-automatic rifle design. This particular weapon is an AR 15.

The bump-stock itself looks like this. This model is made for an AR 15 like the image above.
Image Source: http://militarygunsupply.com/images/slidefire.jpg 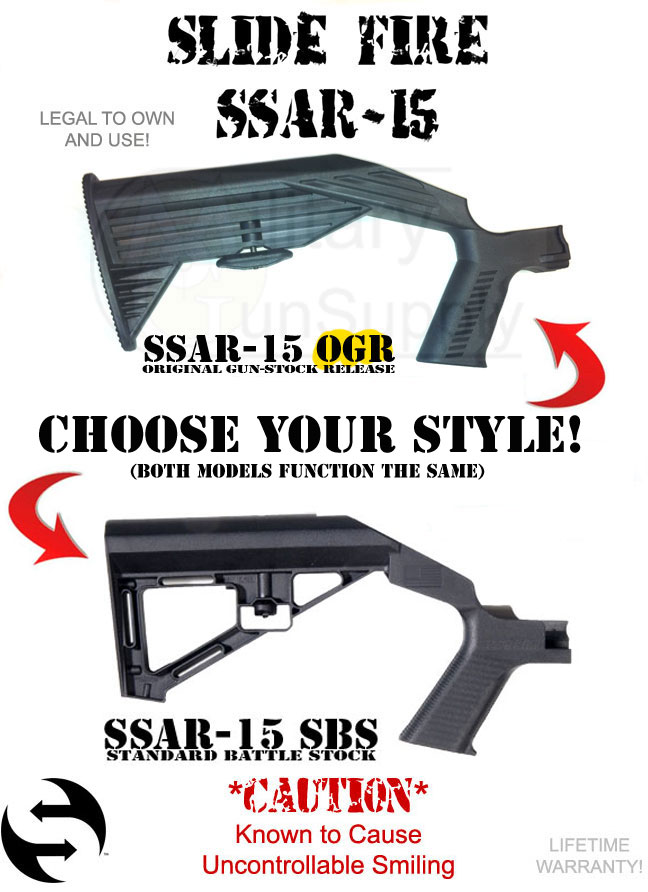 The original buttstock and pistol grip are removed and replaced with the bump stock. The protrusion on the pistol grip is what the shooter applies pressure to, instead of the trigger.

These devices are legal and can easily be installed by anyone with a basic knowledge of firearms, and who can read the instructions. The best, and simplest video I could find as a visual aid for installation, and how it works, is from this guy in Russia. He explains it perfectly though.

I support the second amendment wholeheartedly, but this device is something I can not really see a practical use for when it comes to the everyday citizen gun owner. It looks fun as hell, don’t get me wrong, but why would you really need it?

My friend, Lisa, has been a gunsmith and firearms safety instructor for most of her life.  She said that a shooter with average skill can fire around 90 rounds per minute with a semi-automatic rifle. This is roughly 1.5 rounds per second. Professionals can probably reach around 120 rounds per minute, or 2 rounds per second if their finger holds out that long. I would say that is more than enough to stop an intruder.

As a hunter, I follow the one shot, one kill methodology. If it is not a clean shot, for a clean kill, you do not pull the trigger. So, in my opinion, this device is worthless for hunting.

As for home defense? An assault-type rifle is impractical. The rounds fired could easily penetrate walls and strike innocent people outside of the home or others inside of the home for that matter, even after passing through the target. Using a device such as a bump stock would greatly increase the danger of this happening.

Most professionals that I’ve talked to, like my friend Lisa, recommend a combat style shotgun, preferably 12 gauge, for home defense.

Another advantage of a shotgun for home defense, over an assault rifle are the options for less than lethal applications, such as rock salt loads, rubber pellet loads, or bean bag rounds. I would certainly prefer to end a confrontation, without having to take a life if at all possible. I personally load the first round with less than lethal as a warning shot. If you are breaking into my home, that's more than fair. It's certainly more than you deserve.

So, I personally can see no practical reason for this device to be available for the general public. I am sure many people would argue that point with me, but, that is just my opinion on the matter. I guess it all comes down to individual choice, based on what each person’s firearm use consists of. Many people use firearms as a form of recreation or competition. Except for the times I go to the range for practice or I go hunting, mine stays under lock and key.

The fact remains though that these devices are approved by the government, and 100% legal to own and use. This is because the device has no mechanical means to alter the function of the weapon.

Will the tragic events in Las Vegas change that? Who knows, I guess we will all have to wait and see on that one.

Just to clarify, it was the Obama administration that legalized this device. The NRA (national rifle association) supports reviewing this device, and establishing regulations concerning its sale and use.

Step away from the noise.

A Deeper Look Into ANTIFA... Part 1

Thanks Charles. An AR style rifle is a wonderful home defense weapon for me -- I'm disabled and it's light, easy to shoot, and has little to no recoil. I'm looking specifically for lethality, because I can't get around well, and if an intruder gets the jump on me, I'm done-- I can't defend myself. I've never used a bumpstockj, but I understand from friends it's an assistance device for the disabled.

I know a lot of people who use the AR 15 for home defense. As you mentioned, it is easy to handle, low recoil, and accurate. It is an excellent weapon. My choice of a shotgun comes from personal experience. I fired 30 rounds inside of an abandoned house just to gauge the penetration, as if I was firing at an intruder. 22 of them penetrated and exited the structure through the walls. I saw that as 22 chances that I could have killed someone who was not my target. That's why I prefer a shotgun. Same experiment, with my Mossberg 590 tactical 12 gauge, I emptied the choke, 9 rounds total of 00 buck from the same distance. That's 81 individual projectiles, with my only finding 4 points of exit through the walls. I just like those odds better. It does all come down to personal choice though. I would find it very difficult to live with myself if I killed an innocent person, even if it meant saving my own life. One thing you could do to minimize risk of over penetration is to look into frangible ammunition. Check your state though, they are illegal to use except for target practice in some states.