Lanterns: A Conservative Dialectic: The Seven-Second Attention Span In 500 Words Or Less

A Conservative Dialectic: The Seven-Second Attention Span In 500 Words Or Less

What is our civilization's greatest concern? Is it Islamic terrorism? Maybe it's the far left's attempt to undo our greatness with their attack on our traditions and institutions. Maybe it's both. Whatever it is, it's going to require more than seven seconds to figure it out.

With that said, I now have approximately four-hundred and fifty words more or less to complete this line of thought.

I'd better get busy.

We live in an age of instant gratification, in times freed from nuance and deeper meaning. If our desires are not met with at once, we simply move on to other easier methods to grasp pleasures.
At what cost does this come?

We live with sexual fulfillment a phone call away.  There’s no longer the need for the long drawn out process of courting, and finalizing love's many corridors and closets that are many times filled with the skeletons of previous lessons, learned and forgotten.

We have grown up watching Neo and the Matrix with its instantaneously acquired Kung-Fu skills; these helicopter, piloting programs fed directly into our minds, bypassing time's reality, as we seek this ability in our real lives.

We live in computer generated worlds full of action, and painless, instant deaths designed by our demands for something to do with the hours upon hours of spare time our asymptotic curve offers us.

People no longer have the patience to deal with situations out of their control, and no longer wait for the proper channels to develop and open. We want what we want, and we want it now.

This inability for patience is drilled into our heads, and I believe those doing the drilling have done so with purpose. 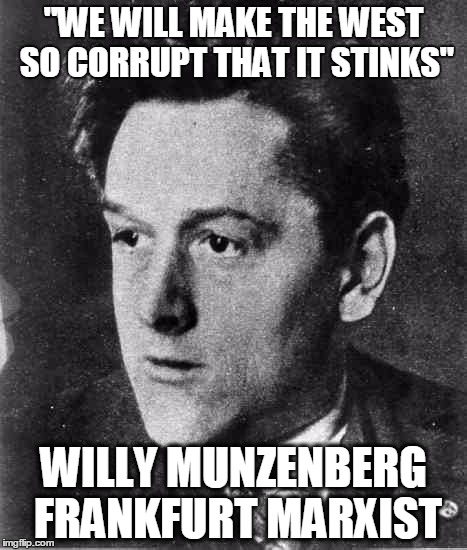 The Frankfurt School was a group of Marxists bent on reworking a failed Marxist design into a new, applicable approach to a Western man that Marx's thinking could not capture. They did this through adding the psychological maneuvering brought into play by world famous psychitrist, Sigmund Freud combining it with orthodox Marxism's "praxis" or matter of course.

They studied subjects like how music and art could be used to re-frame or reformat classical thinking modes. How to teach an ability to dismiss fact and logical processing to children and how to disguise their subversive tactics from the normalcy they wished to deconstruct.

These attempts must be brought out from the shadows and exposed for what they are, but they have instituted the very means necessary to see that not coming about. Their machinations have destroyed the American desire and ability to search out and identify the conditions they inhabit. If this does not change then...

The seven-second attention span will surely bring about our demise.

There, five words to spare.

The Dialectic of Desire: Play-dohs Republic - Don’t Trigger Me, Bro... A Conservative Dialectic

Wow! Wonderful, timely, and spot-on. Looking forward to more from you.

Very interesting article. The one thing the author left out and I believe is very important is that the Frankfurt School moved to the United States immediately after the end of WWII. It was relocated in NYC and is now known as the "New School For Social Thought". It is a continuation of "Progressive" (I.e., Communist) education and thinking. Past Presidents included the likes of Democrat Presidential Hopeful and party stalwart, Bob Kerry and a number of other "luminaries" of regressive thought. This is a critical aspect that has been lost over the years, therefore it is most critical that people understand what this institution is and what it does. For what its worth!