SLAVERY – THEN AND NOW – PART THREE

When I first began this series, I planned for three parts.  I decided after part two it would take four or even five!  In Part One we looked at the early beginnings of slavery in the 17th century, then in Part Two, we looked at the explosive growth and some interesting facts up to the Civil War.  Today we will look at the post-war years.

If you were to look at census records prior to the Civil War, you will find five columns:

The number of free White males and females aged, respectively

The number of male and female slaves aged, respectively

The number of free colored males and females aged, respectively

Number of foreigners not naturalized

Number of persons (including slaves) engaged in agriculture, commerce, and manufactures

You should note that slaves are not assumed to be “colored” and that coloreds are possibly free. 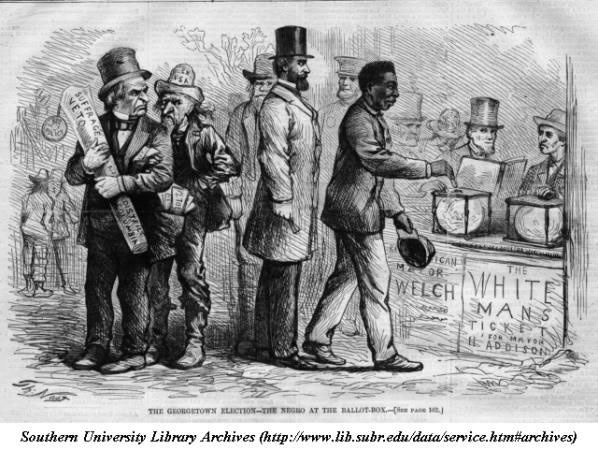 In part two, I discussed how there were a number of free blacks who were slave owners.  This, of course, complicated things more than it solved anything in some ways.  For example, each state determines its voting laws.  Some states allowed free blacks to vote, others did not. Certainly, by the middle of the 19th century, race became a huge determining factor in many cases.  The picture depicting black men voting is of a Georgetown election in Washington DC.

The emancipation of the slaves was an enormous shock to a nation that had been built on slave labor.  Whether indentured by force or lifetime servitude— that ended almost overnight.  If you had a contract for someone to serve for a period of time, that was over.  If you owned a slave, they were free.  Now, these were significant financial investments you suddenly lost. Regardless of the feelings of slavery and its horrors, significant assets were now gone and there was no way to operate the farm or business.

The initial Emancipation Proclamation freed only the southern slaves.  Any slaves held in the North were not free until the 13th Amendment to the Constitution in 1865.  Being a slave, at least, gave you a place to live and food to eat.  What do you do now?

The Republic of Liberia was started as a settlement of the American Colonization Society (ACS) under the idea black people would face better chances for freedom in Africa than in the United States.  Between 1822 and the Civil War, 15,000 from the US and about 3200 from the Caribbean settled in Liberia.  The Liberian Constitution and flag were based on the US Constitution and flag, and in 1848 Joseph Jenkins Roberts (a free-born black from Virginia) was elected as the nation’s first president.  It was believed that the repatriation of blacks to Africa would be better in the long run than simply making them free in America.  No doubt, there was likely racism involved in that belief, and those coming from America did not integrate well with the tribal native population.

Of the now four million freed slaves in the US, most were suddenly faced with a much different burden—  survival.  There were no jobs.  There was no housing or shelter beyond what they had as a slave.  Remember, the average slaveholder had ten slaves, and now without slave labor, they could not suddenly start paying wages on top of the investment they had already made.

The economy had to make a huge adjustment.  Many farms made sharecrop arrangements, allowing the now free slaves to stay and work.  This agreement allowed the landowner to keep the farm going, and they would not have to pay out of pocket for wages.  The sharecroppers would keep (typically) two-thirds of the crop to be sold as their wages.  In most cases, this was no improvement over their previous situation.  In fact, if a crop failure occurred, they had to bear the loss.

Huge numbers relocated north and west—  some as individuals and families, some as groups. There was certainly tremendous resentment on the part of many in the South over the loss of their way of life, as well as the racism issue.  Additionally, reconstruction brought the “carpet baggers” from the North to “re-integrate” the southern states into the union.  One freedman, Houston Hartsfield Holloway, wrote, “For we colored people did not know how to be free and the white people did not know how to have a free colored person about them.”  Certainly a time of adjustment, reconstruction lasted until 1877.  Most Southerners considered this time very humiliating.

Slaves, in most cases, were not educated at all.  In the years following emancipation, they eagerly took advantage of schooling, often a class would have three generations sitting together learning to read and write.  In some cases, large groups relocated for a new start, hopefully away from the problems in the south.  One such community was in my state of Kansas, Nicodemus.

As these groups moved west, they generated a new term.  “Exodusters,” and the movement became known as the “Exodust Movement.”  The Nicodemus Town Company was incorporated in 1877 by six black and two white Kansans.  It is the oldest of about 20 such towns formed after reconstruction.  Located in the northwest part of the state, it was a rough go for anyone regardless of color.  By 1880, the community reached a population of 500; however, the tough conditions, crop failures, as well as resentment by some white residents brought the population down to 200 by 1910.  While many abandoned their homestead claims, county plats show several still owned property in the area well into the 20th century.

Before the end of reconstruction, a number of blacks were elected to federal public office.  Both Senators from Mississippi were black and 21 congressmen were elected.  Remember, prior to the 17th amendment, Senators were selected by the state legislature.  Like it or not, the Democrat Party became the home of the racists, and of the Ku Klux Klan.

I would encourage you to check out the biographies of these early black politicians.  One, Robert B Elliot, left the US House to serve as Speaker of South Carolina’s House of Representatives.  Jeremiah Haralson supported amnesty for former Confederates and opposed the use of federal troops to quell violence in the 1876 election.  There is no denying their importance in these early days following the Civil War.  There is also no denying that when reconstruction ended in 1877 a growing animosity against the blacks in the south led to poll taxes and literacy tests designed to prevent blacks from voting and the growth of the KKK and lynchings of both blacks and whites.

From 1882 to 1968, a total of 4,743 people were lynched.  Of this number 3,446 were black, or about three-fifths of the total.  Many of the lynchings were for supposed rapes, although if a black man and a white woman were found together, it was assumed rape even if the two were a couple.  Many of the whites were in the west for crimes of theft or murder, although many were lynched for supporting blacks or being anti-lynching.  There is an interactive map where you can see every recorded lynching and the circumstances.

The nation was growing, in population and area.  The economy was moving from one that was slave-based to employee based.  There were many dynamics at work in these post-war years and into the 20th century.  In part four we will look at this period, stay tuned!

Written by Michael Murphy The Voice of Reason

The Voice of Reason

THANKSGIVING, A TIME OF INTROSPECTION AND REALITY

SLAVERY – THEN AND NOW – PART FOUR