By Any Means Necessary (BAMN) is gearing up to get their violence on in Berkeley. They are a communist-revolutionary group founded by the Revolutionary Workers League. They also have direct ties to the North American Man/Boy Love Association (NAMBLA), one of the nation’s most prominent pro-pedophilia organizations. They will be targeting the “No to Marxism in America” rally in Berkeley led by Amber Gwen Cummings, a transgender Berkeley “patriot” who says she has a beef with radical, violent leftists who self-describe as “Antifa.” Just wow… I don’t even know what to say except I side with anyone against Marxism and Antifa.

Amber spoke with reporters and activists on Tuesday, arguing that she is not a white supremacist and that violence and the KKK are not welcome at her event. “It’s a free speech rally,” she told the crowd, describing her rally, where she expects about 300 people to attend. “Marxism is being taught at UC Berkeley and anti-American thought. I’m not safe to walk down the road with an American flag.” Good for her. Wow… war makes for strange bedfellows. Her issue, she said, is not with people of color or minorities and her rally is not “right wing.” It’s going to be damned difficult for the left to stand against Amber here, but trust me… they will.

It shows how stupid the ALT left is. My interview today has me dressed in a Antifa mask. These idiots are thinking I’m trying to hide my face LOL, despite many times showing my face and I explained why I had the bandana on I am obviously using this so the public sees how cowardly antifa is and give them a visual of what the Mayor of Berkeley allows in his city and lets them attack our veterans, our police, and our citizens. These terrorists days are numbered till they are in jail. I am sure they will continue to harp on my bandana , they are so stupid I even explained in the video why I am wearing it. I love it , plan succeeded. They will keep talking about it and draw attention to it and put their foot in their own mouths. They will say why am I afraid to show my face and Ill say why are you and most important the public will ask why they are afraid to. The Alt Left is not to bright, but in all fairness neither is the Alt right. Both are idiots. I am going to continue to illustrate the the public visual of these terrorist scum and burn in the minds of our people what terrorists they are. 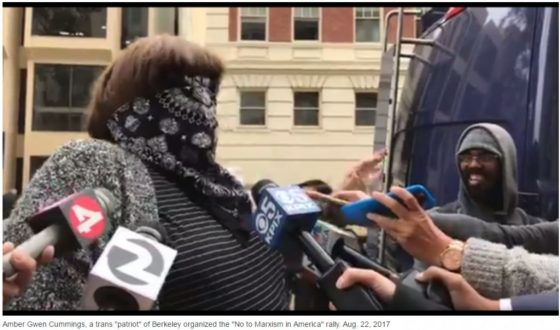 From The Daily Caller:

Violent leftist group By Any Means Necessary (BAMN) is rallying forces to “shut down” a planned march against Marxism in Berkeley, California. Berkeley has already been the site of repeated instances of political violence this year, predominantly by far-left actors.

BAMN is organizing to shut down what it claims is a “Neo-Nazi” rally in Berkeley on Saturday. The rally is titled “No to Marxism in America.” The rally organizer, a biological man who identified himself as a transgender woman to media outlets, claims the rally is not a “right-wing” rally, embraces diversity and is meant to oppose the spread of Marxism in Berkeley.

BAMN, which was founded by the openly-Marxist Revolutionary Workers League, has previously been involved in violent clashes in Berkeley and elsewhere. The group’s members are unapologetic about their use of violence as a political tactic.

Politicians in Berkeley, of course, are telling people to stay away from the anti-Marxist rally… not the communist protesters. For instance, politicians are asking people to attend counter protests, including one led by Unite for Freedom from Right Wing Violence in the Bay Area, who have called for a “Bay Area Rally Against Hate” on UC Berkeley’s Crescent Lawn at Oxford and Center streets on Sunday morning. You know, the Marxists.

BAMN’s leaders include a Berkeley teacher, Yvette Felarca, who was charged last month with inciting a riot in Oakland. Per The Daily Caller, Felarca and other BAMN activists have tried to “brainwash” and “indoctrinate” students into their violent cause during school hours. BAMN has been instrumental in organizing the riots that shut down right-wing commentator Milo Yiannopoulos’ speech at the University of California–Berkeley in February. They also planned aggressive demonstrations against conservative commentator Ann Coulter and the students coming to hear her talk. That led to the cancellation of Coulter’s speech in April due to safety concerns.

The confrontation and rally will happen on Saturday. It’s going to be explosive and could set everything on fire.

The force behind the "No to Marxism" rally in Berkeley is Amber Cummings, a self-described transgender patriot https://t.co/K5azcKqdKU pic.twitter.com/FQglopMisM