A Deeper Look Into ANTIFA... Part 2

Let's take a quick look at the rise and fall of the original Antifaschistische Aktion (Antifa) in Germany. 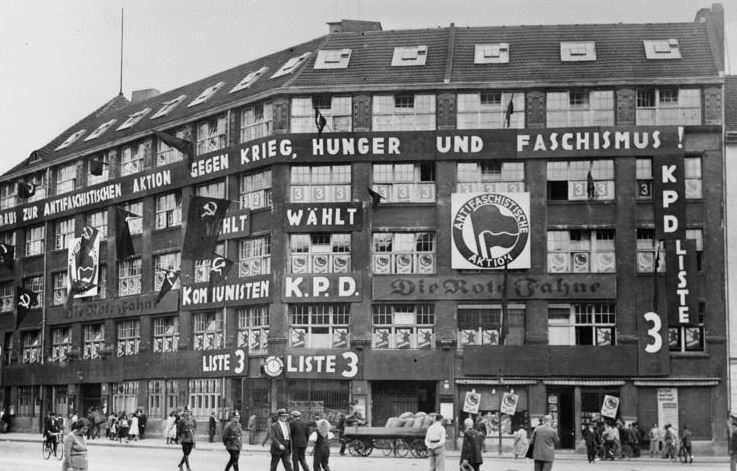 Early in the 20th century, German communists, backed by Stalinists in Russia, attempted to violently overthrow the newly formed Weimer Republic government of Germany. These attacks were unsuccessful primarily due to the communist's lack of leadership. Due to infighting, the communists struggled with their attempts to organize, but eventually, they founded the Kommunistische Partei Deutschland (communist party of Germany) or KPD. The KPD’s main political target going forward would be the fascists, and Antifaschistische Aktion (Antifa), would be its paramilitary arm.

Gustav Noske, the German defense minister within the Weimer Republic had very strong anti-communism beliefs, and his concerns over these insurrections led to a national call to action to fight against communism. He formed Freikorps (free corps) out of mostly disaffected WW1 soldiers to act as mercenary groups dedicated to eliminating the communists at all cost. It did not take long however for the fascists to take these Freikorps over resulting in the "brown shirt militias" and the eventual Nazi takeover of Germany. Essentially, the Nazi's crushed the communist party in Germany and sent both the KPD and Antifa into relative obscurity throughout WW2.

The KPD regained some ground during the cold war primarily in Soviet-controlled East Germany, but pockets also existed on the other side of the wall in West Germany as well. They still maintain a strong presence today. If you have Microsoft Translator, you can check out their publication here. Post WW2 found Antifa basically without an enemy to fight since the KPD turned its focus onto the liberal democracies of the west, and capitalism. This relegated Antifa into the role of anarchists the KPD used to cause civil unrest as a means of furthering their agenda.

Antifa has reared its head pretty much everywhere there is civil unrest, which today seems to be just that, everywhere. Not so much in America though. We heard a little about them in the 90's during the "Occupy Movement", and again in the early 2000's with the anti-globalization protests, but not much else.

And then this happened: Through their puppets, the MSM, (mainstream media) the far left was quick to make sure Trump’s "America First" slogan was labeled as nationalism, and this almost immediately morphed into fascism. Once that happened and the hysteria set in, Antifa and its many faces were mobilized. At first, under whatever flag was raised at the time to add legitimacy to their name, but this has rapidly escalated to where they act under their own flags. This seems to be an attempt to distinguish themselves as some sort of “alternative” nation within America, fighting for the rights of all.

When you really think about it though, here in America, this Antifa philosophy does not hold water at all. They claim to be anti-fascist, but we have already established that there really are not any true fascists in America to be “anti” towards. They claim to be anarchists, which is a word from the Greek "anarchos" ("without ruler"). Yet, they are attempting to pave the way for the far left progressives who are pushing three types of totalitarian government— Marxism, Communism, and Socialism under a "strong centralized government" otherwise known as a ‘Social Democracy.’

One of the most ridiculous aspects of this whole thing is that they claim to be against fascism, which in America's case is capitalism and conservative values while creating terror among the population in order to clear the way for a system of government that is just as totalitarian as the fascist governments of Hitler and Mussolini. Sounds like one massive contradiction of ideologies here does it not?

To explain this, we have to go back to my earlier statement that Antifa is a strategy, not a political ideology or movement.

According to Langer’ booklet, it seems that Antifa would not see its position as contradictory because the organization has no clear definition of fascism.

Fascism is simply a label used to justify their actions.

The thing is, quite often their definitions of fascism are what they themselves are doing and saying, far more than their target. This hypocrisy is demonstrated in this video by Counter Arguments, featuring (school teacher) Yvette Felarca— the leader of B.A.M.N, (by any means necessary), an Antifa branch. She can be seen defining Milo Yiannopoulos as a fascist. Her conviction is so apparent as she describes Milo... well, as herself.

So it appears that since they have no real definition of fascism, if their handlers sent them to a protest over the sky being blue instead of green, the color blue, and the sky itself would be labeled fascist, or racist, sexist, or any other “ist” they can make apply, because they are not there to push an agenda. They were sent there to create chaos and intimidation—  nothing more. Their view of things is quite fluid, in that they seem to have no concrete identity themselves. They are an extension of whoever is holding their reins at the time. In America's case, many believe that to be our own government's far left element.

This is what the citizens of our country need to understand about Antifa. They are not heroes as the MSM might identify them. They are not activists trying to end social injustice in America, and they are not well-meaning protestors looking to create change through peaceful resistance.

They are hired guns—  mercenaries, who have no ethical standards to regulate their actions.

Many accuse the far left of unleashing these thugs into our society in order to browbeat the citizens into a state of constant fear. This is no different than when the Soviets unleashed them on German citizens back in the 1930s as an attempt to establish communism. They do not care about social injustice, racism, sexism, or any other of the things the mislead masses are screaming in the streets about.

They were mobilized to terrorize the population, and they will attach themselves to any movement that allows them to do that, whether they believe in it or not. This is their job, and they do it well. Many do not believe me on that, that this is a job for Antifa, and nothing else. They really think that these people are on some altruistic crusade to save America. Well, if that were the case, why then are they very loudly demanding that George Soros pay them the money they are owed?

But in the end, they are still just a club used to tenderize the population before they get cooked. Just one more move on the chess board as our country struggles to resist its deliberate destruction from those within our own government. A strategy within a strategy that starts with indoctrinating the young so that they know no other way than the one they are taught.

I think though if I were whoever is currently controlling this group, I would be very careful. Given their decidedly unscrupulous nature, they may just find this pack of dogs chomping on their own throats before this all plays out. While they may think this group is working for their agenda, at its black rotten core, Antifa is a communist organization, and they are still the paramilitary arm of the communist party, even though at the moment they appear to be the armed branch of the Democrats. So, it stands to reason that once that agenda begins to conflict with their own goals of a communist society, they will turn on the social democrats supporting them. They were, after all, once the communist parties prime target, and by extension, Antifa's as well.

What this means, in a nutshell, is that our dealings with Antifa are just beginning. The communist party is sitting back and waiting for our country's infighting to run its course. No matter the outcome, our nation will be weakened by the struggle, and people will be demoralized by all of the violence and looking for any way to end it. (This is, after all, the main goal.)

Even if the left succeeds in destroying our American Republic and we become a new country under socialism, it will not last long. Our next and immediate battle will be against communism, and Antifa will be right in the middle of it, doing what they do. Eventually, the people are going to become so beat down by all of the violence, they will simply give up, and the United States of America as we know it will cease to exist, and will fall under communist rule.

This same methodology has been behind the rise of communism throughout history, and in one form or another, every communist country was at one time, a socialist country.  Whenever you start to believe that socialism is a good thing, remember the words of the founder of the Russian Communist Party, Vladimir Lenin—

"The goal of socialism is communism."

** The exact number of white supremacist in America is impossible to truly quantify. Therefore the numbers are a broad estimate based on available data, and not necessarily a 100% accurate accounting.

So, What Exactly is a Bump Stock?

Socialism vs Capitalism... Revolution or Evolution