Amidst the tensions surrounding North Korea, China is asserting its status as a world power in a way which cannot be ignored. Late yesterday reports began to stream in that China has launched its second, as yet unnamed Aircraft Carrier (Type 001A)  which will join its progenitor the Liaoning, the refit former Soviet carrier Varyag circa 1988.

According to the Washington Post/AP citing the Chinese Ministry of National Defense, the 70,000-ton vessel was towed from the shipyards at Dalian a mere 223 miles across the Yellow Sea from North Korea. At the carrier's top speed of 31 knots (About 35MPH Source: Forbes/Statista), it is a mere six hours from Pyongyang. 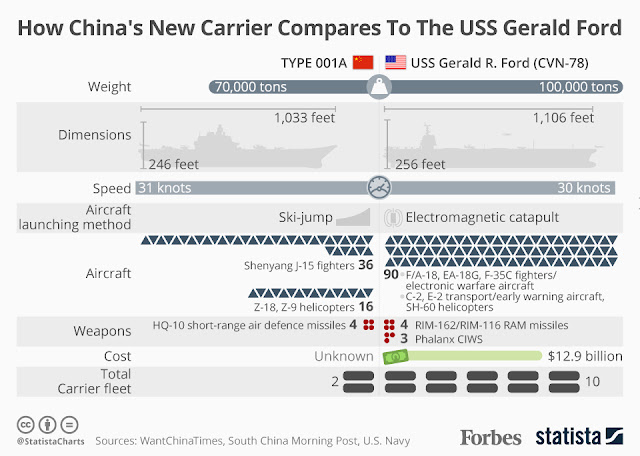 This launch indicates the successful reverse engineering of the Soviet design after nearly twenty years of research and development and follows a mere five years after the re-commissioned Liaoning took to the seas.

"Development of the new carrier began in 2013 and construction in late 2015. It’s expected to be formally commissioned sometime before 2020, after sea trials and the arrival of its full air complement."

The reports from Nikkei and Zero Hedge detail the stunning progress China has made at an alarming speed:

"Future aircraft carriers are likely to be built faster now that China has amassed the design experience and technology to bring the first vessel to launch. Work on a second Chinese-made carrier has already begun. The vessel probably will employ a steam catapult to launch aircraft, retired Maj. Gen. Xu Guangyu told Chinese media. The third vessel is expected to use nuclear propulsion, eliminating the need to resupply fuel. Work on escort vessels and submarines for a carrier strike group is also underway."

Based on these analyses the Chinese Peoples Liberation Army Navy (PLAN) could field an equal though a less advanced number of carriers to the US (10 at present 2 under construction) within the next twenty years, conservatively.

The balance of global power is changing daily, and as Beijing continues to apply pressure to Kim Jong-Un, the situation in Asia could change quickly. America has returned after twenty years of soft posture, and China's fleets, long neglected since the 15th Century, are returning to reclaim the eastern seas.