Lanterns: WAR DRUMS: A US Navy Strike Group Is Heading For The Korean Peninsula

WAR DRUMS: A US Navy Strike Group Is Heading For The Korean Peninsula

President Trump has ordered a US Navy strike group to head for the Korean peninsula. Fresh off showing our enemies that we will not tolerate genocide or the use of chemical weapons in Syria, a message is now being sent loud and clear to both the Chinese and the North Koreans. Either Kim Jong-un stops his aggressive moves with ballistic missiles and nuclear weapons, or he will be answering to the American military. This isn’t a big stick, it’s a club and I believe it is a wise move. Trump can either take out Jong-un, nuclearize South Korea or hit North Korea. One of those options is most likely to take place in the near future. We are out of options.

However, for now, the US is considering financial sanctions. I’m not too sure that will work, but it seems to be the next step. Sanctions, in my opinion, will cause North Korea to make a move. Their people are already starving because of the communists leading their country. “If they continue to develop nuclear capability and create missiles that can reach the United States, that changes the calculus for us,” said one diplomatic source. And time is running out on the nuclear clock. North Korea called America’s missile strikes on Syria ‘unforgivable’.

From the Daily Mail:

A U.S. Navy strike group will be moving toward the western Pacific Ocean near the Korean peninsula as a show of force, a U.S. official told Reuters on Saturday, as concerns grow about North Korea’s advancing weapons program.

Earlier this month North Korea tested a liquid-fueled Scud missile which only traveled a fraction of its range.

The strike group, led by the aircraft carrier USS Carl Vinson will make its way from Singapore toward the Korean peninsula, according to the official, who was not authorized to speak to the media and requested anonymity.

In a statement late Saturday, the U.S. Navy’s Third Fleet said the strike group had been directed to sail north, but it did not specify the destination.

The military vessels will operate in the Western Pacific rather than making previously planned port visits to Australia, it added.

This year North Korean officials, including leader Kim Jong Un, have repeatedly indicated an intercontinental ballistic missile test or something similar could be coming, possibly as soon as April 15, the 105th birthday of North Korea’s founding president and celebrated annually as ‘the Day of the Sun.’

Bill Clinton started this whole mess with North Korea. He also gave military secrets to the Chinese. Since then, we have bowed to extortion by the Hermit Kingdom. But it’s gone way beyond that now. Obama made it much worse, so now Trump is being forced to clean up his mess. It probably won’t end well. Kim Jong-un is even more insane than his father was… dangerously so. He’s just itching to use nukes against the US.

The Carl Vinson Strike Group comprises an aircraft carrier and other warships. I am told that the USS Champlain, USS Meyer, and USS Murphy along with a nuclear weapon launch submarine are part of the group – no verification of that. They aren’t messing around over this and it is not an idle threat. US Pacific Command described the deployment – now heading towards the western Pacific – as a prudent measure to maintain readiness in the region. President Trump has said the US is prepared to act alone to deal with the nuclear threat from North Korea. “The number one threat in the region continues to be North Korea, due to its reckless, irresponsible and destabilizing programme of missile tests and pursuit of a nuclear weapons capability,” US Pacific Command spokesman Dave Benham said.

The strike group is officially comprised of the Nimitz-class aircraft carrier USS Carl Vinson, two guided-missile destroyers and a guided-missile cruiser. As well as massive striking power, the carrier group – headed by Admiral Nora Tyson – has the capability to intercept ballistic missiles.
It was originally due to make port calls in Australia, but instead, has been diverted from Singapore to the west Pacific – where it recently conducted exercises with the South Korean Navy.

North Korean is said to be prepping the testing of an intercontinental ballistic missile. There is also whispers of another nuclear test in the works. Trump warned last week that the policy of ‘strategic patience’ with this rogue regime was over. “If China is not going to solve North Korea, we will,” he declared bluntly. 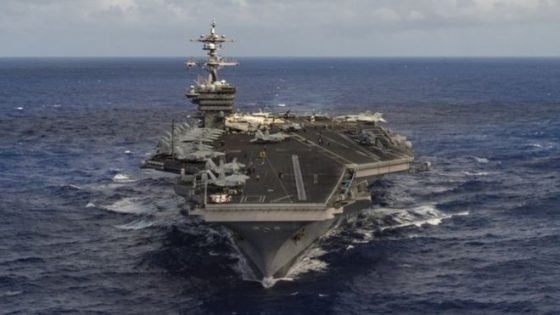 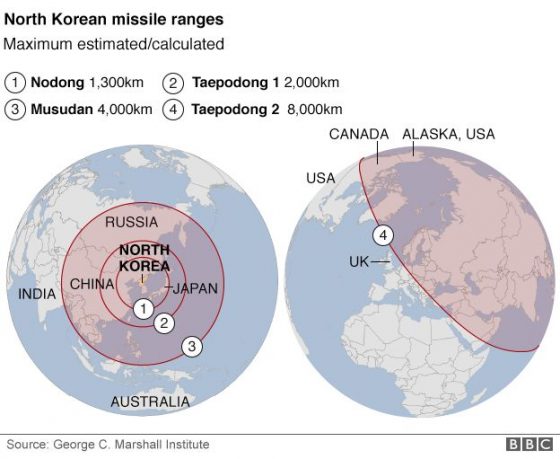 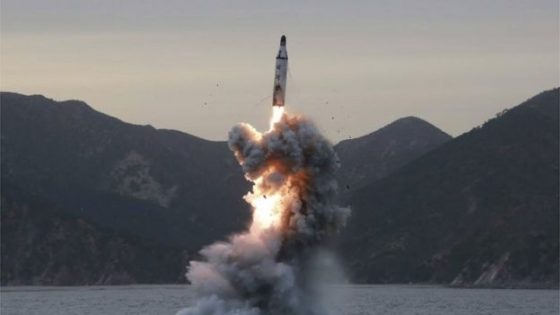