Lanterns: #DeConfederation: The NAACP & #BlackLivesMatter Seek to Tear Down History

#DeConfederation: The NAACP & #BlackLivesMatter Seek to Tear Down History

Erasing the past is a common theme among communists, socialists, fascists and now, American progressives. Despite the guns falling silent over a century and a half ago, today the Arizona Chapter of the NAACP valiantly defied the final vestiges of the Confederate States of America. After beginning in South Carolina, grabbing national headlines in Louisiana and now coming to Arizona, the process of "DeConfederation" has begun.

According to the Smithsonian, Walter Williams, a man believed to be the final surviving Confederate soldier, died in 1958. With that said, to put it bluntly, Arizona State Representative Reginald Bolding Jr. and East Valley NAACP President Roy Tatem Jr. in cooperation with Pastor Reginald Walton of Black Lives Matter Phoenix are waging a PR war against the dead. 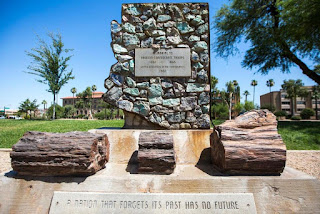 Cloves Campbell, publisher of the Arizona Informant summarized the argument to remove the monuments in a press conference carried on Facebook live by The Phoenix New Times:

"Sure it's a piece of history but it's one thing to memorialize something that's wrong. And we can learn about history. You might as well put up a banner that memorializes the KKK. I mean, these are the same types of things we're talking about. So let's not hold up something that's wrong, lets bring it down. We want to learn about it, but we also want to know about what's right. And celebrate the good things that this country has done."

Mr. Campbell's approach and the argument against these monuments has the inherent flaw of revisionism. With the decline of textbook sales and the malleability of digital records, how do we preserve our history in a verifiable, lasting fashion? How do we properly memorialize the victory of the Union over the Confederacy and the blood sacrifice of an estimated 620,000 lives paid for the grievous sin of slavery? How do we give the customary respect of honorable burial to the Confederate Dead, which we've given our enemies in every other major conflict throughout our history? How do we honor the Southern culture and our shared history without glorifying slavery and disrespecting the descendants of the freed slaves? I do not believe that a bulldozer or a truck crane present the solution.

Marshall Trimble, the state historian of Arizona, summed it up in a quote to the Associated Press.

"One thing that America should be proud is that it's never tried to expunge or hide its history. It's let the world see its warts and all," Trimble said. "Our country has not been perfect. The slavery issue is a real blot on American history."

But perhaps the Duke himself, John Wayne, said it better:  "Sure I wave the American flag. Do you know a better flag to wave? Sure I love my country with all her faults. I'm not ashamed of that, never have been, never will be."

We must be able to honor the dead, wave our flags, and love our country— one born in the flames of independence, forged in defense from tyranny, and tested in the crucible of civil war without attempting to erase the uglier parts of our past. Yes, there is a monument in downtown Phoenix to memorialize the Confederate dead of Arizona. They lost though, we won. Let the dead rest.

Trump Told NATO Members to Pay Up, And He's Right

Only a Non-Violent Patriot Movement Can Prevent Civil War